And now for the most unromantic thing you’ll ever hear:

I know of a couple, both in their twenties, who were watching TV together.

It was a cold Brooklyn night and he was suffering with terrible allergies so he really didn’t feel like walking her home after.

In response to his not so serious bellyaching, she said, “Well, if we lived in the same place, you wouldn’t have to.”

They got married three weeks later.

And today, my parents, would be celebrating their 48th anniversary.

I miss my dad so damn thoroughly.

His absence from my existence tugs at me, unrelentingly, like the rough ocean undertow.

And such is death. It blindsides the living.

With that, a great man and a good friend of mine died today.

He was the only liberal on Fox News and he sometimes played their punching bag.

Which was fine with him because he stood firmly for justice, a healed planet, and the well being of all.

But underneath his political life, right underneath it, he was a spiritual seeker. On the quest for the holy grail of a peaceful mind.

That’s how we met. Many years ago. After he read Live Like A Fruit Fly.

And now, unfortunately, on February 23rd 2017, on my parent’s wedding anniversary, he’s become the poster child for my book which he so enjoyed.

Alan was just sixty-six. He loved his wife ferociously.

May he rest in peace.

So, moving right along with this meandering stream of cosmically unplanned flow of words and spaces, my sister was just in town and she and my mom invited me to go to an indoor flea market with them.

I didn’t go because the last time I was there, I sat across from my dad in the food court as he handed over his car keys to me.

It was like a veteran police officer relinquishing his badge and gun.

I didn’t know at the time, but that moment would turn out to be the first of countless horrifying ones with him.

His double vision was getting worse and that drive to the flea market was the last time he sat behind the wheel of a car.

He was dead in eleven months. Brain tumor.

Looking back, and hearing about Alan’s passing today, it seems like Life delivers varying degrees of awfulness until we wake up.

Until we wake up to the gift of worrying less.

Worrying less about what truly does not matter.

Because it’s all just going to end anyway. Whether we pretend it won’t or not.

From this point on, I hope to be caused to hold on to this gift more often

And I hope the exact same for you. Yes, you. The person reading this right now.

I’ll close now with a hopeful quote I’ve closed with before. It was said by Ray Manzarek. The keyboard player for The Doors who has also since passed.

And I take this opportunity to say Alan Colmes. And Harold Berman.

“Meet the new generation of consciousness-raising. Gabe’s simple, yet profound message can be a life-changer.” Live Like A Fruit Fly
―Alan Colmes, Nationally Syndicated Radio Host 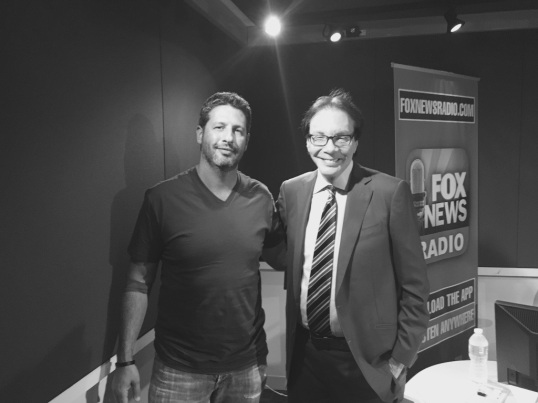 This moment is either filled with stress

Who is there to know?

And both will pass regardless.
– gb