Regardless of how it may have tested in some corporate boardroom, I assure you, beyond question, Dancing Queen by ABBA is never appropriate for a cool coffee cafe such as yours. Especially at this current, insanely loud volume.

I mean c’mon, haven’t you guys heard of Buddha Lounge?

Wait, Marvin Gaye’s Got To Give It Up just came on.

Posted in self publishing, self-publishing, writing and tagged Starbucks | Leave a comment

A squirrel is squirreling in the grass outside the kitchen window.

Moss outlines the bricks of the brick patio.

At ease and still, like a painting of a pond.

But in a moment, the old ghosts return to haunt. I should be succeeding. Vanquishing. Proving myself. Making better use of the time.

Hmm, something is definitely different today though. The ghosts are just empty sheets with holes cut out for eyes.

They’re no longer the leads in this play and leave the stage just as quickly as they entered the scene.

Although I’ve been strangled by the feeling of insufficiency for as long as I’ve had language, the urge to impress anyone, even myself, now feels prehistoric.

And I don’t care who else is on board with this. The squirrel knows what’s up though.

I certainty don’t invite it, but death could come today and I’d be okay with it.

I always have been.

And so are you.

“In Live Like a Fruit Fly, Gabe Berman shares his recipe for living a more joyful, worthwhile, and abundant life in every way. A witty, entertaining, and insightful read.” ―Deepak Chopra, Author, The Seven Spiritual Laws of Success 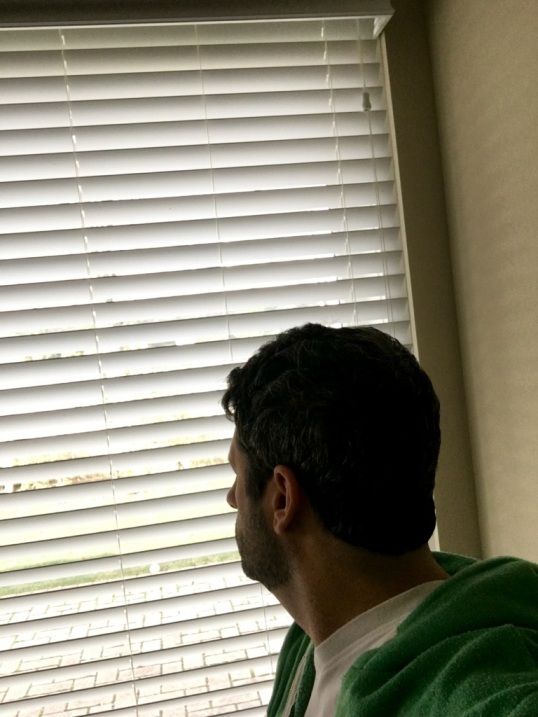 That’s what my dad called the Ewoks.

And just because they were on screen for few minutes of Return Of The Jedi, he hated the entire movie.

And if anyone ever mentioned this third installment of the Star Wars saga, he’d contort his face as if swallowing the aforementioned poison and would say, “Stupid teddy bears.”

Once, I think I even heard, “Fucking teddy bears.”

But between you and I, although he always said he hated it, I knew he loved it.

My dad and I saw Jedi together about a billion times throughout the years and every time, like me, he was riveted.

And stupidly, every time he’d make his teddy bear remark afterwards, I’d verbally get angry with him.

First of all, don’t blaspheme against the holy trilogy.

Secondly, and more importantly, I despised my dad’s stick-in-the-mud mentality when it came to certain things.

Ewoks, pizza not being well done enough, unwillingness to watch cartoons with my nephews when they were tiny, not wanting to use his cell phone except for nights and weekends, predictably unpredictable episodes of volcanic anger over nothing, and did I mention those squooshy Ewoks?

And now it’s all meaningless.

Just memories I can laugh and/or cry about.

With that said, the new Star Wars, as everyone in the galaxy knows, opens tonight. Thirty-eight years after my parents first took me to see the original one when I was five. A long time ago…

I’ll miss him more tomorrow morning, when I see it with my mom at 10 am, than I will for all of the holidays combined.

The Force was our football. When it was on TV, there was absolutely no talking to us. We were fully focused like X-wing pilots in the Death Star trench.

We wouldn’t even eat. And for my dad, Captain Constant Consumption at your service, that was unheard of.

Because my dad was the epitome of both.

may the force be with you, always,
gb

How I Wish You Were Here

Just giving you a heads up, this isn’t going to be worth reading.

And yes, I know that sounds like a ploy to actually get you to read, but I swear it’s not.

It’s just something I know I need to write, so I’m going to. But it’s not going to be good. I really have nothing of value to say to anyone right now.

I’m just sitting here. On the couch. In the dark. Watching Good Will Hunting. With tears in my eyes.

A perfect movie. Which I won’t do a disservice to by talking about.

At the end of this day.

Three years exactly since I stood over my dad and watched him take his last breath.

I miss him so much.

Also, coincidentally, today is the day that I found out that I’m not sick.

I had a bit of a health scare but like I said, I’m good.

Before I was wheeled in for the endoscopy, a few days after the esophagram I had to have, I thought about the time in college I had surgery on my right arm after breaking it rollerblading.
I dreamt of Pink Floyd’s Wish You Were during the operation. At least, I thought I was dreaming about it. In reality, I was waking up from the anesthesia and the doctors were listening to it in the operating room.

And check this out, a moment before they induced me into to la la land today, I noticed a framed photo of the moon on the wall. The caption read: The dark side of the mood?

More evidence pointing to how the universe is intricately connected and more proof that every “coincidence” is a reminder of that connection. Winks from an ineffable intelligence.

And, just maybe, a wink from my dad. Letting me know it’s all going to be okay.

“Just do what’s in your heart son, you’ll be fine.” – Sean Maguire to Will Hunting. And just maybe, another wink from my dad to me. I’ll choose to believe it was.

Before I Blow Out The Candles

True love can be vicious.

And true love can be violent.

And just a few years ago, I had no choice but to become the most uninhibited, unconditional expression of viciously violent love.

My dad decided to stop eating.

He wanted to die.

Because, he was dying.

But since we’ve all heard of cancer patients who’ve experienced spontaneous remissions, I sure as hell wasn’t going to let him squander a chance for a miracle.

Even if it was only a one in a million shot.

Of course I understood why he was giving up, and the truth is, I may have done the same.

Then why did I disallow it?

Because he would have done the same for me.

We had each other’s back. Until death do us part. And no one, not even him, was going to talk me out of leaving my wingman.

He was an extremely strong willed man and was used to being in control and getting his way.

No friend or family member could convince him to take even a bite of anything. From a hospital bed, with very limited ability to move, he was certainly still in control.

I asked him kindly to please eat.

I asked him again, but this time, to just do it for me.

Vicious, violent love was our only option.

I lunged at his chest and grabbed the lapels of his bathrobe like I was about to destroy a guy in a bar fight.

With one explosive hoist, I lifted his upper body off of the bed so we were eye to eye with me barely hinging at the hips.

With a controlled raised voice I said, “You’re going to eat. And you’re going to do it. Now. And I swear to God if you don’t, I’ll fucking throw you to the floor and if anyone tries to help you, regardless who they are, they’ll end up in this rehab center.”

He tried to say something but I talked right over him.

“This isn’t a debate. You’re eating.”

We just looked at each other and breathed for a moment in silence.

He knew this wasn’t a toothless threat and he nodded in agreeance.

I let go of his robe and his head smacked against the pillow.

I should have been more gentle about, but like Elvis, my gentleness had left the building and my heart was pumping with the toughest of love.

However, within a second, he was feeding himself applesauce.

And before I went home for my daily two hours of sleep, I rested my head on his chest and have him a good hug.

I told him I loved him, and that I was sorry.

He kissed the top of my head.

I cried all the way to the car.

And now I’m going to tell you something that I’m really not supposed to: the birthday wish I’ve been making every year since.

P.S. This isn’t a debate were his words. I heard them often as a kid when I unsuccessfully tried to talk my way out of situations. I can thankfully smile about

I had the green light, but a mom pushing her baby in a stroller radiated vibes that she might try to make it across from the left side of the street.

Inside my head, right behind my ears, I heard my dad’s voice say, “Slow down. Move to the right.”

I automatically heeded the advice but thankfully she decided to stay put.

And when I say I heard my day’s voice, I literally did. As if he was in the backseat.

And I really don’t think I really realized how much I missed him until I safely made it through the intersection.

I miss him like I’d miss my eyes if I went blind.

And now here I sit in Starbucks, with the echo of his words resonating in my mind, and tears are forming once again.

In less than a week, it will be three years since he left, and it fucking feels fresher than yesterday.

I went to a new doctor the other day and I had to fill out the obligatory, thirty-five thousand forms attached to the dreaded clipboard. For the family medical history, I put down that my dad died from brain cancer.

Almost out of body, I witnessed the pen in my hand as those words were being written and I was like, “Is this for real man?”

The truth is, my entire life has seemed out of body since the day he was diagnosed.

And that’s not good.

Nor is it bad.

It’s just what is.

I am grateful for everyone who has been patient with me,
gb 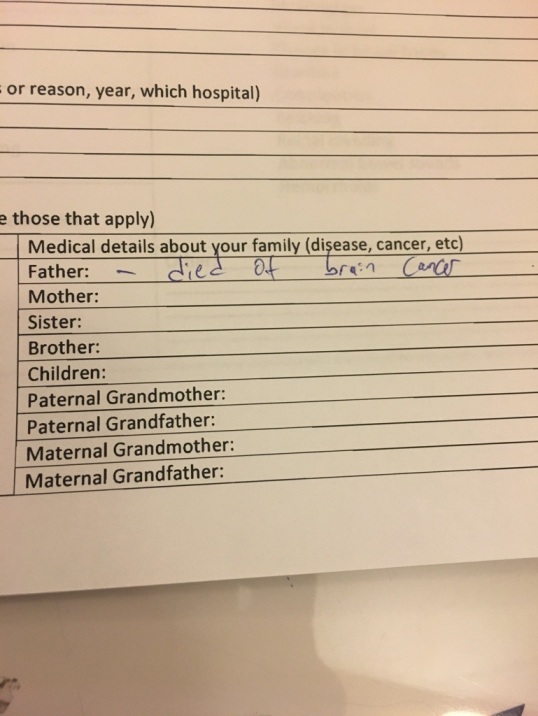 Posted in ghosts and tagged ghosts | Leave a comment